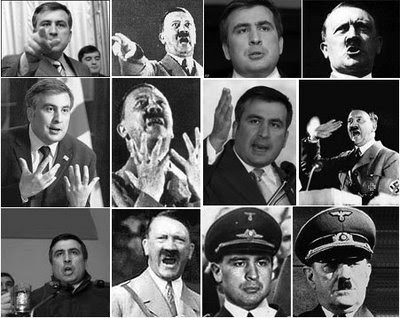 “Make the lie big, make it simple, keep saying it, and eventually they will believe it.”
Adolf Hitler
[See also: Hitler calls on Georgians to win back Abkhazia‏]
-29 April 2008, An excerpt from Saalashvili's speech.''About 450,000-500,000 pride residents of Abkhazia live in exile in their own country. They cannot return to their homes, to their villages, to their family members and relatives, to the graves of their ancestors, to their friends, with whom they found their feet, with whom they were going to school, with whom they grew up.''
http://www.president.gov.ge/?l=E&m=0&sm=3&st=150&id=2597

-25 September 2009. "Abkhazia today has been emptied of more than three-fourths of its population," he (SAAKASHVILI) said. "Gardens and hotels, theaters and restaurants have been replaced by military bases and graveyards."
http://in.reuters.com/article/oilRpt/idINN2548235220090925
Another excertps from different sources:

It's Georgia started the war and created huge humanitarian catastrophy.

On 14 August 1992 when the Abkhazian Parliament was due to discuss discussing a draft proposal for a Federation with Georgia, Georgia invaded Abkhazia.

''In February 1992, the provisional Georgian Military Council announced Georgia’s return to its 1921 constitution. The Abkhaz Supreme Soviet was concerned that Abkhazia’s status was not adequately taken into consideration and so a draft treaty outlining plans on federal relations was sent to Tbilisi. Tbilisi did not respond and in July 1992 the Abkhaz Parliament reinstated the 1925 Abkhaz Constitution. On 14 August 1992 Georgian armed forces entered the Gali region of Abkhazia...''
http://www.fco.gov.uk/en/about-the-fco/country-profiles/europe/georgia?profile=politics&pg=7

Abkhazia unilaterally decided to open the gates for the (largely Mingrelian) refugees to return to Abkhazia from Georgia in 1999. Georgia at that time was actually accusing these refugees of being TRAITORS to Georgia. More than 60,000 refugees have been successfully resettled in Abkhazia.

During the war some Kartvelians (Mainly Mingrelians who lived in Abkhazia) fought against to Abkhazians. According to the 1951 UN Convention on Refugees, those who use arms in an armed struggle and then flee do not fall under the international definition of refugees. The responsibility for these people fell and falls solely on the Georgian authorities. It is important to note here that a great many of those who fled from Abkhazia were recent immigrants. They were partly victims of the compulsory resettlement organized by (Georgian) Stalin (Ioseb Besarionis dze Jughashvili) and his Abkhazian-born Mingrelian lieutenant Lavrenti Beria. See: Demographic change in Abkhazia.

Abkhazian society can allow the return only of those Kartvelians who did not fight on the Georgian side and only after they recognize Abkhazia as an independent state. And same right for return should be given also to descendants of Abkhazian refugees from the Caucasian War of the 19. century, who live mostly in Turkey.

See also: Fact Sheet On The Republic of Abkhazia's Refugee Program
Posted by AP at 13:02