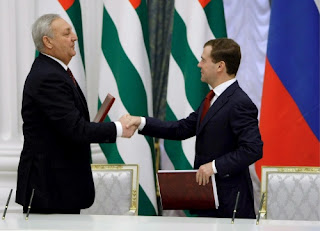 The message of reply reads, in part:

“I sincerely congratulate you and the people of Abkhazia on this significant date, one that is important for our bilateral relations.

In August 2008, Russia made a difficult but responsible decision. It guaranteed the right of the Republic of Abkhazia to self-determination, free and independent development, and ushered in a new phase in the Republic's history. I would especially like to stress that our position is final and will not be subject to revision.

Today Abkhazia is confidently addressing problems connected with the development of its statehood. The activities of its democratic institutions are being established, the Republic's border is being strengthened, socio-economic infrastructure is gradually recovering, and citizens are more confident about the future.

Over the past year Russian-Abkhazian relations have become those between two independent countries. The key event in this regard was the signing of the Treaty on Friendship, Cooperation and Mutual Assistance between the Russian Federation and the Republic of Abkhazia.

Our countries are witnessing new opportunities for constructive work in the trade, economic, social and humanitarian spheres. Our priority remains ensuring peace and security in the region. We intend to continue to help the people of Abkhazia soon overcome the consequences of hard years of defending their right to follow their own independent development path.”
Posted by AP at 10:24