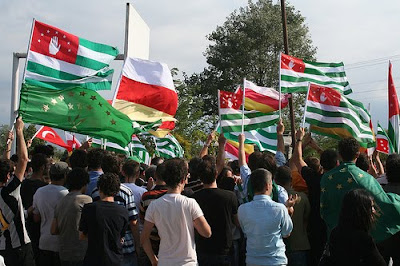 26 August, SUKHUM, ABKHAZIA - The President congratulated the Abkhaz Diaspora living in the Republic of Turkey on the anniversary of independence of Abkhazia.
The congratulation letter sent to the Caucasian committee of solidarity with Abkhazia says “it is a holiday for every Abkhaz, whatever country he lives”. “The centuries-old dream of our nation has come true. It is our common victory”, Bagapsh emphasized.
At the same time, according to the Abkhazia’s Plenipotentiary in the Republic of Turkey Vladimir Avidzba, the numerous Abkhaz Diaspora in Turkey intends to mark grandly the anniversary of the recognition of Abkhazia by the Russian Federation.
Posted by AP at 16:11