>> http://gallery.abkhazworld.com/#4.41
The maps included here give an idea of the frontiers of Abkhazia at various times in history. The Abkhazians call their capital /Aqw'a/, but it is more usually known in other languages as Sukhum (Sukhum-Kalé or Sukhum-Kaleh in the period of Turkish influence along the Black Sea's eastern coast; /soxumi/ in Georgian). The ending -i in the form /Sukhumi/ represents the Georgian Nominative case-suffix, and it became attached to /Sukhum/ from the late 1930s when (Georgian) Stalin (Ioseb Besarionis dze Jughashvili) and his Mingrelian lieutenant in Transcaucasia, Lavrent'i Beria, began to implement a series of anti-Abkhazian policies. Abkhazians today, for obvious reasons, resent the attachment of this element from the language of a people they see as oppressors. 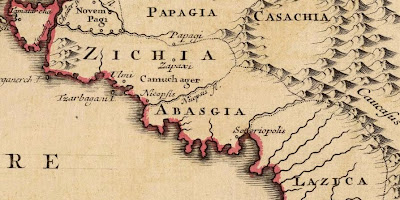