Medvedev says ties with Georgia could resume after Saakashvili 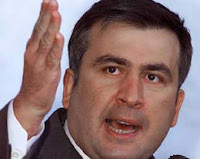 Switzerland has represented Russia's interests in Georgia and Georgian interests in Russia since diplomatic ties were cut between the two sides following last August's five-day war between Moscow and Tbilisi over the former Georgian republic, South Ossetia.

"If we are talking about the present government meaning the current President Mikheil Saakashvili, it is an absolute no," Medvedev told a meeting of the Valdai Discussion Club in Moscow.

"If we are talking about a future government without Saakashvili, certainly, there is [the possibility] for a resumption in diplomatic relations," the Russian leader said.

Medvedev pledged not to accelerate the global recognition process for South Ossetia and another former Georgian republic, Abkhazia.

"As for the recognition of Abkhazia and South Ossetia, the process is underway, though it is quite slow. I said initially this does not matter to us, what matters is having our citizens protected, that people feel safe," the Russian president said.

He said Russia would be happy if its partners were ready to recognize the two republics as independent, just like Venezuelan President Hugo Chavez did last week.

"He [Hugo Chavez] said he would tell others... I have no objections, but I will not speed it up either just because I do not think it is appropriate," Medvedev said.

On August 26, Abkhazia and South Ossetia celebrated the first anniversary of Russia's recognition of their independence. Until Chavez' visit to Moscow, Nicaragua had been the only other country to have recognized the two republics as independent.
Posted by AP at 20:25