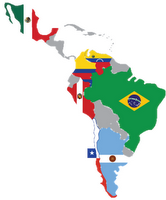 10 September 2009 - SUKHUM, ABKHAZIA
The delegation of Abkhazia’s visit in Latin American countries goes on. On Wednesday night, September 9, the Republic of Abkhazia representatives were received by the Minister for Foreign Affairs of Nicaragua Samuel Santos Lopez, said the chief of the Information Department of the Ministry for Foreign Affairs Irakly Tuzhba, being in Nicaragua as a part of the Abkhaz delegation.
During the meeting the parties have exchanged opinions concerning socio-economic and political situation in the republics and discussed possibilities of developing bilateral mutual relations in all the directions of intergovernmental cooperation.

The republic of Nicaragua is one of the leading Latin American countries in agriculture, including meat and milk products, coffee, cocoa and other crops which are traditionally cultivated in Latin America. Thus, there is a possibility of mutually advantageous cooperation in trade and economic sphere.

The Nicaraguan side once again confirmed full support of independence and sovereignty of the Republic of Abkhazia, emphasizing the line to build a modern, economically developed state is right.

According to Maxim Gvindzhiya, the deputy Foreign Minister, “the recognition of independence of Abkhazia became an obvious example that the Nicaragua’s leadership follows independent foreign policy based on the principles of justice”.

The signing ceremony is set for September 10 and will be held in the presence of the President of Nicaragua.
Posted by AP at 08:58