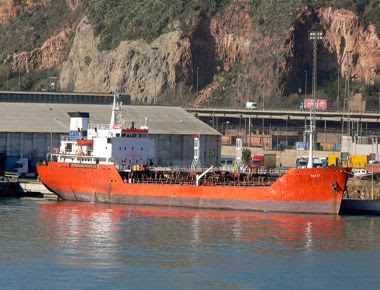 On Aug. 17, a Turkish ship named Buket was sailing 96 miles off the coast of Sinop near the border of the Turkish economic region when it was detained by the Georgian Coast Guard and brought into the port of Poti.

The ship was taken to the Batumi Port to be sold, and the ship's crew was taken into custody. There were 15 Turkish citizen personnel and two Turkish citizen interns aboard the ship, which was operated under the flag of Panama and by DENSA Tanker Operators. It was carrying 2,800 tons of fuel from the Turkish Petroleum Refineries Corporation (TÜPRAŞ), Turkey's largest oil refining company, to the Abkhaz port of Sukhum.

The Buket is not the first vessel detained by Georgia for trading with Abkhazia. According to official figures, Georgia seized more than 40 ships between 1999 and 2003 and 22 ships between 2004 and 2006 on charges of “illegal crossing of Georgian waters.”

Two additional ships sailing under the Russian and Ukrainian flags were seized on Jan. 10, 2007. More recently, on April 5, a Turkish ship named Denfa Demet and on April 29 another Turkish ship, named New Star, were brought into the port of Poti. Georgia is seeking to prevent any trade with Abkhazia, which is officially within Georgia's borders, over the Black Sea without its supervision. Sometimes it even violates international law. However, a new order developed in the southwest Caucasus after Russia recognized Abkhazia's independence on Aug. 26, 2008 following a war between Russia and Georgia in August 2008.

The new order came into being once Moscow began removing socioeconomic sanctions on Abkhazia in March 2008. Since then, Abkhazia has rapidly integrated with the Russian economy, and owing to railways and highways at Russia's border crossing (Adler-Psou), Abkhazia has managed to connect to the world. Georgia's efforts to enforce a blockade on Abkhazia via the Black Sea are not as effective as when Russia supported Georgia's blockade. It is for this reason that Georgia's traditional policies toward Abkhazia are actually fostering relations between Abkhazia and Russia.

Ankara is aware that a new order is developing in the southwest Caucasus and that Abkhazia can no longer be considered an insignificant factor. Since Russia's recognition of Abkhazia's independence on Aug. 26, 2008, there has been an increase in the number of parliamentary questions asked by main opposition Republican People's Party (CHP) deputies. In October 2008, CHP Bursa deputy Onur Öymen asked the transportation minister; in November 2008, CHP Antalya deputy Tayfun Süner asked the Ministry of Foreign Affairs; on May 7 and Aug. 21 CHP Konya deputy Atilla Kart asked the Prime Ministry; and most recently, on Aug. 26, CHP Bursa deputy Öymen asked the Ministry of Foreign Affairs questions on removing the humanitarian and trade embargo on Abkhazia and on the status of Turkish ships seized by Georgia.

Policies that neglect Abkhazia only benefit the Russian Federation. It is for this reason that Ankara has tried to contribute to stability in the region by assuming a leading role in the Caucasus Stability and Cooperation Platform. An adviser from the Prime Ministry has been assigned to conduct studies on the Caucasus. Without damaging its current relations with Georgia and going into conflict with the European and Atlantic world, Ankara is searching for ways to improve its humanitarian and trade relations with Abkhazia. Although it is challenging, it is necessary to realize that Turkey is searching for a new policy on Abkhazia.