Abkhazia: Bagapsh to run for presidency 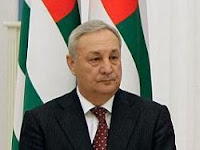 SUKHUM, October 27 (Itar-Tass) - The United Abkhazia Party held a congress on Tuesday, which nominated Sergei Bagapsh, the incumbent president of the republic, as its presidential candidate for the coming elections.

Daur Tarba, president of the United Abkhazia Party, said on Monday that “we have supported and continue to support Sergei Bagapsh, our president, since the emergence of our movement, later transformed into a party. The city conference of the Party decided to nominate him as a presidential candidate.” He added, however, that United Abkhazia would not nominate a vice president. This is the right of the presidential candidate, and “we shall support the candidate to the post, whom Bagapsh will name.”

Presidential elections will be held in Abkhazia on December 12. The nomination of candidates began on October 13 and will end on November 2.

The opposition Abkhazian Economic Development Party nominated its leader, Beslan Butba, as presidential candidate on October 23.
Posted by AP at 09:20