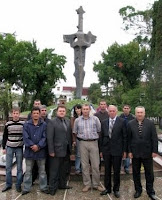 Circassian World - September 27, 1993, Sukhum, the capital of Abkhazia, was freed from Georgian troops. This directly involved Caucasian volunteers. In particular, the man who hoisted the flag over the Abkhazian Government House was a Kabardian Volunteer - Aslan Abayev.

On the occasion of the 16th anniversary of the liberation of Sukhum, there was a solemn procession in the city. Members of the Adyghe Khase, Republic of Abkhazia (Akhra), together with a delegation from the Kabardino-Balkaria Republic (KBR), gathered in the square at the front of the Memorial of Glory, laid wreaths of flowers in honour of the victims of the Abkhazian Patriotic War of 1992-93. At the memorial (in the form of a dagger) were written the names of all those who gave their lives for the freedom of Abkhazia. Among these heroes were the names of the Adyghe volunteers. After laying flowers, the chairman of Akhra, Aslan Beshtoev, and the leader of Social Movement "Khase", Ibrahim Yaganov, congratulated the Abkhazian people in honour of the holiday.

On 26th of September there was held a regular meeting of the Council (Akhra) at the Research Institute of Abkhazia. On the agenda were the following questions:

1. Report of the Chairman of the Khase Board on performance;

2. Report of the Head of the youth wing on the work done;

3. Admission of new members in Akhra;

4. Participation of Akhra in the celebration of the anniversary of the liberation of Sukhum;

5. The question of joining the ICA (International Circassian Association)

President of Akhra, Aslan Beshtoev, in his report gave an account for of all the tasks that were set before him at the founding meeting. These were the questions pertaining to the registration of Akhra in the manner prescribed by law. He showed the certificate of registration displaying the printed letterhead of the organization. "Now we can legally and legitimately carry out our activities on the territory of Abkhazia" - he said.

Astemir Sheriev, head of the youth-wing of Akhra, made a report on its work. In particular, he provided a report on his participation in the Forum Cherkessia Youth, held in Cherkessk on September 12. After reading out the main points of the resolution adopted at the Forum, he assured those present that the Abkhaz Khase supports the Circassian youth movement in the Caucasus and will actively participate in the implementation of the resolution.

Aslan Beshtoev reminded the meeting that the next Congress of ICA is approaching, and he suggested membership for Akhra in this organization. The proposal was supported unanimously. In this connection, all documents required for entry have been prepared and submitted for consideration to the Executive Committee of ICA. "The decision will be taken at a meeting of the Executive Committee of the 2nd October. There is no reason to accept us there"- said Beshtoev.

In a continuation of the meeting, the issue of repatriation of the Abkhaz-Adyghe to their historical homeland was raised. Beshtoev read the bill on the repatriation of the Russian Federation, which was adopted by the State Duma at its first reading. For him, any Circassian (Kabardian, Adyghe, Abazin) can freely return to their home country and obtain citizenship. But one of the participants in the meeting noted that there may be a problem in the bill relating to the documentary evidence belonging to the expelled citizens of Russia Empire. "If this bill is adopted, in countries where Circassians have to get a document proving that they are Circassians descended from people expelled from the Russian Empire this could prove very problematic. This problem will be addressed in the countries of residence of the Circassian Diaspora "- said Zaur Hog.

The meeting also adopted a written greeting to the people of Abkhazia and to all who took part in its liberation from the Georgian aggressors. The text of congratulations reads in full:

"The Adyghe Khase, Republic of Abkhazia, congratulates the people of Abkhazia and all the volunteers who participated in the war of 1992-93, on the day of victory. During those difficult years, the entire Circassian (Adyghe) nation felt the pain of the fraternal Abkhazian people and by all available methods became involved in their liberation from occupation and aggression. Volunteers from the North Caucasian republics came in hundreds to Abkhazia to participate in the war. Their actions demostrated the loyalty and brotherhood between our peoples in all situations. We, as then, are ready to stand shoulder to shoulder with our brothers whatever is necessary in the name of freedom. We express our deep conviction that in the near future the statehood of the Republic of Abkhazia will be recognized by the world. The Abkhaz people deserve the right to defend their freedom by force of arms."

Council of Adyghe Khase Republic of Abkhazia
Posted by AP at 19:56