Semneby met with KAFFED (Federation of Caucasian Associations in Turkey) 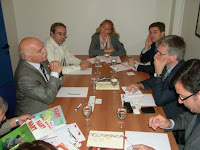 At the meeting Adyghe-Abkhaz diaspora and the positions of the relations with Abkhazia, the embargo against Abkhazia, visa problems that citizens face with, the policy of European Union's to Abkhazia, demands of Diaspora and return subject, the status of refugees in Abkhazia and democratic developments in Turkey had been discussed interactively. The meeting was so effective and closed by plannig to continue similar ones and negotiations in coming days.
KAFFED is the largest and most influential North Caucasian umbrella organization of 58 active Caucasian associations in Turkey. KAFFED is a member of the International Circassian Association.
Posted by AP at 00:04