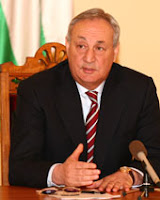 July 1, SUKHUM, Abkhazia -- President Sergey Bagapsh supports multi-party political system in Abkhazia. “The political system of Abkhazia must be based on a multi-party system. We are now in the situation when the necessity of changes in the political system of the country has become obvious. There should be three-four parties in Abkhazia, competing with each other in a civilized manner, struggling for power legally, politically”, President Sergey Bagapsh said at a meeting with the “United Abkhazia” activists.
“Like it or not, but we have and will have both a party that has won, and oppositional political forces. We will have to take it as a given”, the Head of State said.
At the same time Bagapsh also emphasized the enormous responsibility of the party, whose candidate wins the presidential election.
Source: AbkhaziaGov.
Posted by AP at 10:18