Lavrov: The Problem of Sukhum and Tskhinval is also settled for other serious countries 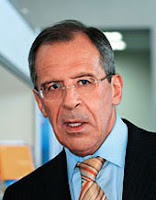 June 15 -- The Minister of Foreign Affairs of Russia Sergey Lavrov declared that, by recognizing Abkhazia and South Ossetia, Russia had “finally” settled these conflicts, what “other serious countries” agree with.
“For us the question is settled once and for all. I'll take it upon myself to say that it is also finally and irrevocably settled for other serious countries. Simply by virtue of political correctness or other political reasons they cannot officially acknowledge this. I have said, on more than one occasion: that was not our choice; all complaints, if someone still has any, should be addressed to Mikhail Saakashvili, who trampled the territorial integrity of Georgia”, he said in an interview with the Kommersant when he was asked, whether the status quo in relation to separative regions was forever.
As he said, the point about defining the status of these regions had been crossed out from the final draft cease-fire agreement of August 12, 2008 by request of president Saakashvili.
“When the aim of the operation to suppress aggression was fulfilled and the Russian president gave the order to halt the military operation, the Medvedev-Sarkozy plan was agreed upon, providing the basis for further action. The sixth point of the plan was the thesis about the need to start international discussions on the status of Abkhazia and South Ossetia and on ensuring their security. We signed up for this. That is, on August 12, 2008, the day on which the military operation was concluded, the Russian president agreed that the status of these regions was subject to international debate”, Lavrov said and went on:
“We did not have any thoughts that would have a geopolitical dimension. We were thinking about how to stop the killing of our citizens and residents of South Ossetia. We just took a breath and were in the political framework of which I now speak. We were ready on the day of the end of hostilities to continue the discussion on the status of Abkhazia and South Ossetia. The document was agreed. French President Nicolas Sarkozy took it to Tbilisi. And then he rang and said that Saakashvili was categorically against discussing the status of these republics, that for him the status was clear and this phrase must be crossed out. We agreed”.
“By the way, Saakashvili also manipulated other parts of the Medvedev-Sarkozy plan. Because the six points were preceded by an introductory text, which read: the Russian and French presidents endorse the following principles and urge the parties to implement them. In the document which eventually Saakashvili agreed to sign, he not only threw out the phrase about the status of Abkhazia and South Ossetia, but also struck out the introductory part and now claims that the document calls for Russia, inter alia, to discontinue some things, whereas the introductory part said clearly and unambiguously that the two presidents urged the parties to do so-and-so. That’s why it is called the Medvedev-Sarkozy plan”, Lavrov said in an interview.
As he said, Russia had already fulfilled the obligations ensuing from the cease-fire agreement in the context of withdrawal of its troops from the separatist regions what Tbilisi and international organizations called Moscow to.
“The troops who participated in the suppression of the attack on South Ossetia were withdrawn to Russian territory. By that time, status discussions had failed amid revanchist statements from Tbilisi that the war was not over. So by the end of August it was decided that there was no way to ensure the security and survival of the Abkhaz and South Ossetians other than recognizing their independence. And the current contingents of Russian troops in South Ossetia and Abkhazia are there on a different legal basis – on the basis of the agreements between Russia and the two states recognized by it. Russia has fulfilled this part of the Medvedev-Sarkozy plan”, Lavrov said.
He also said that “those who say that we should return to the line we held before August 8 forget that prior to August 8, 2008 our troops stood in the depths of Georgian territory”.
“The peacekeepers were not only in South Ossetia, which was then part of Georgia, but also outside it. The same thing was also around Abkhazia. Therefore, if they call upon us to advance beyond South Ossetia and Abkhazia to the lines on which our peacekeepers had ensured security before August 8, 2008, I would be grateful if they told us directly so”, Lavrov declared.
Source: Abkhazia Gov.
Posted by AP at 10:18