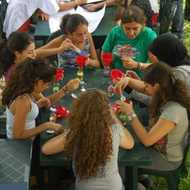 By Patricia Mouamar - July 20, LEBANON - Children from Lebanon, Bosnia and Herzegovina and Abkhazia met to celebrate their vision of peace and learn from each other’s experiences during World Vision’s first regional children and youth peace forum held in Lebanon.
More than 30 children and youth came together from different ethnic, cultural and religious backgrounds to take part in the forum activities. Their countries have experienced either internal conflict like Bosnia and Herzegovina, cross-border conflict like Abkhazia, or both - as in the situation of Lebanon. For those children peace is not just the ability to play football freely, nor a responsibility left for grown-ups to handle.
“Peace is relationship,” said 14-year-old Aia, from Abkhazia. “When you have good relationships you cannot fall into conflict. All children [at the camp] had lived some sort of conflict, some are based on religious reasons, some on politics, but despite that, our role is to get together and say NO to tears, to wars and destructions.”
“Peace is not to have discrimination, hatred, humiliation and anger; it is like a little tree that needs to be watered with love, generosity, solidarity,” said 15-year-old George, from Lebanon. “A child is peace,” he added.
Children were inspired by their peers and the work they have done such as creating the Children’s Council in Lebanon, the book its members wrote about children’s rights and a song they recorded about living in peace. They listened to one another as they talked about their experiences, difficulties and challenges.
“We don’t have children councils in Bosnia, nor such kinds of activities,” said 13-year-old Amina from Bosnia. “We don’t do any of this. I would like to talk about this with my friends back home and maybe do some of these activities.”
“When I go home, I want to pass my ideas of building peace not war,” said 13-year-old Malik, from Bosnia. “My friends may laugh at the idea of peace building; they think that others just want war, but having a camp [forum, like this] would help them understand.”
“Children were communicating among each other as if they knew each other for ages,” said Ali, a youth volunteer with World Vision programmes.
Children also celebrated tolerance and diversity during a cultural night where they performed traditional dances, songs and played music from their own countries.
In many countries around the world, World Vision aims to support and empower children as peace builders in their communities. In Lebanon, the Children’s Council project is equipping children with tools, knowledge and skills to involve them in influencing their communities and peers to contribute to a more just, peaceful and tolerant society.
“Children’s interaction was very touching, especially in a country where people think that children are divided the same way adults are,” said Patricio Cuevas Parra, World Vision Advocacy Director in Lebanon.
The forum was funded by the Eagle Down Foundation and World Vision Switzerland.
Source: World Vision Middle East/Eastern Europe/ Central Asia office
Posted by AP at 18:11