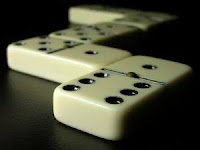 RT, June 7 -- Abkhazia has been chosen as the host of the next year’s world championship in dominoes.
The decision to award the honor to the state was made in Las Vegas, which was the venue of the last championship, the head of Abkhaz Dominoes Federation, Artur Gabunia, told Interfax news agency.
It was expected that the 2011 tournament would take place in Venezuela or the Dominican Republic. But Gabunia offered the candidacy of Abkhazia, which received wide support.
The Federation’s head added that the representatives of Russia and Venezuela were among those who were the most active in backing his idea.
Now Abkhazia is awaiting the arrival of the commission from the International Federation of Dominoes, which will determine the conditions of the championship.
The international status of Abkhazia remains disputed. So far its independence has been recognized only by Russia, Nicaragua, Venezuela and Nauru.
Dominoes are played at a professional level, similar to poker. The game is especially popular in Latin America, where it is often broadcast on TV.
Source: RT
Posted by AP at 21:40