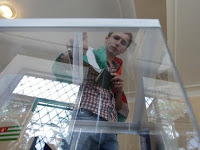 30 August 2011, openDemocracy -- The Black Sea republic of Abkhazia has elected its third president since securing effective independence from Georgia in 1993. The tiny country faces economic and social difficulties, in part deriving from its lack of international recognition. But its democratic experience deserves more attention and respect than much of the world seems prepared to give, says George Hewitt in the capital, Sukhum.

The month of August tends to be an eventful one in the small Black Sea republic of Abkhazia. In 2011, the country was already set to mark a series of anniversaries connected to the events of the last two decades: the war for survival and independence from Georgia (August 1992 - September 1993), and - after fifteen ensuing years of de facto sovereignty - the confirmation of its statehood following the Georgia-Russia conflict over South Ossetia in August 2008, a statehood which Russia itself (on 26 August) was the first formally to recognise.

Then, an unexpected event changed the character of the season: the death at an FSB hospital in Moscow on 29 May 2011 of Abkhazia’s president, Sergei Bagapsh, as a result of complications following an operation for a smoking-related complaint. The loss of Bagapsh, who had been re-elected for a second term in 2009 and was scheduled to hold the post until 2014, necessitated an election within three months (according to Abkhazia’s constitution) to choose a successor.

Three candidates competed for the post, two of whom resigned in July from their government posts in order to run their campaigns - Alexander Ankvab (the acting president following Bagapsh’s death, who had also served as prime minister, 2005-10); Raul Khadzhimba (who had served as vice-president, 2005-09 following a dispute over the presidential election of 2004 in which he had run against Bagapsh); and Sergei Shamba (the serving prime minister until the election was announced, and Abkhazia’s foreign minister, 1997-2010).