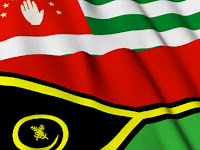 …eyes trade relations with Abkhazia and Georgia
By Jane Joshua
Vanuatu’s Minister of Foreign Affairs Alfred Carlot has apolgised for the miscommunication between the Ministry of Foreign Affairs and Vanuatu’s UN Representative-Donald Kalpokas in New York.
This, minister Carlot said, was due to his absence on a multilateral mission abroad in Seoul.
But he made Vanuatu’s stand on recognition for Abkhazia clear when he revealed Vanuatu is looking forward to establishing Trade relations with the Republic of Abkhazia and the Republic of Georgia in the “very near future”.
“As the Minister of Foreign Affairs I reaffirm Vanuatu’s recognition to the Republic of Abkhazia,” said minister Carlot.
“Vanuatu signed diplomatic relations with the Republic of Abkhazia in Port Vila on May 23, 2011 by Prime minister Sato Kilman.
“Vanuatu conducts an open foreign policy and is amongst other members of the international community in eradicating colonialism from the face of this planet. Vanuatu is neutral; our recognition of Abkhazia does not in any way mean that we cannot have diplomatic relations with the Republic of Georgia.
“We wish to extend our most sincere invitation to the Republic of Georgia to establish relations with us.
“One of our roving ambassadors will be visiting the region later this year.”
Minister Carlot further revealed that having personally studied at the Moscow University on an exchange scheme( MGIMO) in 1987 he has a “very good understanding of the geo-political situation in that region”.
Abkhazia has Sergei Bagapsh as its president and Georgia’s president is Mikheil Saakashvili.
Boasting a population of over 250,000 (Christians and Islamists) with agricultural (citrus fruit, tobacco, tea, timber,) coal and hydro-electric power as its natural resources Abkhazia is considered to be the break away region of Georgia(1992-1993 war) and its economy is highly dependent on Russia.
Despite declaring its independence in 1999 it is not recognised by many international communities and Vanuatu is only the second country in the Pacific after Nauru to recognise Abkhazia.
Here are some key dates in the history of Abkhazia as provided by the BBC:
756 - Independent kingdom formed, 985 - Becomes part of Georgia, later regaining independence, 1578 - Comes under Turkish rule, 1810 - Russia declares Abkhazia a protectorate, 1864 - Russia annexes Abkhazia,1931 - Soviet authorities incorporate Abkhazia into Georgia, 1991 - Georgia declares independence, 1992 - Georgia sends troops to stop Abkhazia breaking away, 1993 - Fierce fighting ends with Georgian forces being expelled from Abkhazia ,1994 - Ceasefire agreed, peacekeepers arrive, nearly all Russian, 1999 - Abkhazia declares independence, 2004 - New Georgian president Saakashvili vows to restore Georgia’s territorial integrity and return Abkhazia, South Ossetia to the fold, 2008 - Russia formally recognises Abkhazia’s independence, following the Russian-Georgian war over South Ossetia and 2009 - Russian Prime Minister Vladimir Putin visits.
Source: Vanuatu Daily Post
Posted by AP at 00:31