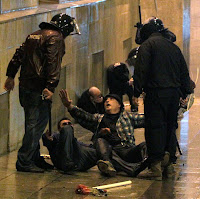 Hurriyet Daily News (29 May 2011)
Nowadays, a new wave of domestic turmoil is allegedly threatening Georgia’s political stability. Last week’s popular protest against President Mikhail Saakashvili, organized by one of his previous comrades-in-arms, former parliamentary speaker Nino Burjanadze, demanded his immediate ouster.
The demonstrations immediately attracted the attention of the international public, which has been engrossed in recent popular uprisings in the Middle East. A certain segment of the Western media, for instance, particularly those who basically follow the events from their offices in Moscow, was not late in describing the demonstration as the latest Arab spring wave and one set to sweep through the former Soviet republics.
Burjanadze, too, plays to this card. She accuses Saakashvili of monopolizing political power in Georgia and claims that a “new revolution” has inevitably started in Georgia. The fact that the rallies were launched to thwart the annual Independence Day parade in one of the main squares of Tbilisi suggests that the opposition is trying to create a kind of “Tahrir Square effect” in the country. The organizers of the protest have indeed declared that they are modeling their actions on the popular uprisings that swept the Middle East recently.
Since his rise to power on a wave of democratic optimism during the famous 2003 “Rose Revolution” that toppled Eduard Shevardnadze, I have been following Saakashvili with mixed feelings. On the one hand, I appreciate his reforms, first and foremost his vivid fight against corruption. I traveled through almost all the ex-Soviet countries and have closely observed that it was this institutionalized daily-life phenomenon that raised many people’s hackles.
On the other hand, however, I have been critical of Saakashvili’s semi-authoritarian tendencies and overdosed self-confidence, best exemplified by his attempt to solve the impasse in the Abkhazian and South Ossetian problems by military means. Indeed, in those days his decision to resort to force was a kind of self-destruction. It was very clear that Russia, due to the Kosovo crisis, would respond extremely harshly. Those who sincerely want to find out what led Saakashvili to take such a decision need to look to the commitments he was given by the neo-cons of the George W. Bush administration, particularly by then Vice President Dick Cheney.
I still believe, nevertheless, that reservations similar to those of mine are not enough to demand his resignation. And more importantly, to compare what is going on in Georgia with the recent popular uprisings in the Middle East is nothing more than nonsense. The reasons are very simple:
The driving force for change in the Middle East has sprung from youth motivated by a lack of hope, as well as disgust. Yet those who took part in the recent demonstrations in Georgia are older people, struggling to cope with low pensions and rising prices. The heart of their beef with the president is the accusation that he has failed to tackle poverty. In contrast, the Georgian youth find their hope in Saakashvili and they are somehow embedded with the regime. Neither they nor the newly emerging middle class want a return to the political instability or corruption that plagued the country before Saakashvili rose to power.
And more importantly, the popular uprisings in the Middle East arose from a deep ground swell. It was spontaneous. The “new revolution” in Georgia, in turn, is one designed from the top. It seems to be compulsive. Accordingly, opposition in Georgia lacks credibility among ordinary Georgians. They are divided. For instance, several opposition parties refused to take part in Burjanadze’s protest.
There is one final trait that needs to be emphasized: In the course of several visits to Georgia, I have closely observed how nationalistic the Georgian people, the youth in particular, are. As long as there is Russian Prime Minister Vladimir Putin, whose sword of Damocles hangs above the head of Mr. Saakashvili, the Georgian people will continue to rally around their president. I mean, who would be particularly happy to see their president “hung by his balls” by a leader of another country, as Putin so colorfully put his intentions during the war of August 2008.
Source: Hurriyet Daily News
Posted by AP at 18:48