"No person will be left in Gagra" Gia Karkarashvili‏ (Telegraph Herald, Oct. 4, 1992)‏ 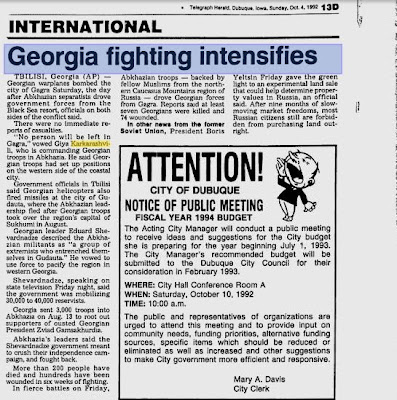 - "...Additionally, the Commander-in-chief of Georgian troops in Abkhazia, General Georgiy Karkarashvili warned in a televised formal address to the Abkhaz and Georgian people in Sukhumi on August 24, that no prisoners of war will be taken by the Georgian troops, that if 100,000 Georgian lose their lives, then [on the Abkhazian side] all 97,000 will be killed; and that the Abkhaz Nation will be left without descendants. The delegation saw a video recording of this ominous speech." (http://www.unpo.org/downloads/AbkGeo1992Report.pdf)
- A similar threat came from the head of Georgia's wartime administration, Giorgi Khaindrava, on the pages of Le Monde Diplomatique in April 1993. Goga (Giorgi) Khaindrava, told the correspondent from Le Monde Diplomatique that "there are only 80,000 Abkhazians, which means that we can easily and completely destroy the genetic stock of their nation by killing 15,000 of their youth. And we are perfectly capable of doing this."
- The Georgian Commander-in-Chief on TV threatens the Abkhazian nation with genocide: http://www.youtube.com/watch?v=XzvtaZIMy98
- "In the first place, the Ossetian war [1991-92] in Tskhinvali had just ended. The Georgia National Guard suffered heavy losses. We were exhausted. That’s why I thought it was reckless to go into Abkhazia. But I was told that the 13th-14th August was a good time to launch a military operation because the Russian Parliament was in recess. Unfortunately, we entered Abkhazia in a very disorganized way. We didn’t even have a specific goal and we started looting villages along the way. As a result, in the space of a month we managed to make enemies of the entire local population, especially the Armenians." Gia Karkarashvili - "Absence of Will" Documentary film by Mamuka Kuparadze (11.52 sec.) http://vimeo.com/8826939
Reporter: Did they turn against us just because of the way our troops behaved?
Karkarashvili: "No, not just because of that. But we shouldn’t have allowed all that hatred to build up. We could have prevented it, but we didn’t."
____________
THE INDEPENDENT
Georgia seizes Sukhumi
Wednesday, 19 August 1992
SUKHUMI (AP) - Georgian troops backed by tanks seized control of the Abkhazian capital of Sukhumi yesterday and a military council was appointed to rule the rebellious region.
The Georgian Defence Minister, Tengiz Kitovani, arriving hours later at the Abkhazian parliament building where the Abkhazian flag had been pulled down and replaced by a Georgian one, said the action was taken because Abkhazia had declared its independence from Georgia last month.
'Every Georgian who loves his nation will support this step,' Mr Kitovani said.
Tanks and armoured vehicles rolled into the coastal city in western Georgia earlier yesterday. Georgian troops were reported to have fired upon the headquarters and set the parliament building on fire. A duty officer at the government building said the attack had left several buildings on fire.
Georgian military officials said its troops and Interior Ministry forces were in control of all major objectives in Sukhumi, including the airport. Georgian troops controlled the television tower, the seaport and other key sites.
The Georgian government sent 3,000 troops to the breakaway region of Abkhazia last week to pursue supporters of former Georgian President Zviad Gamsakhurdia, who was ousted in a brief civil war in January. The leaders of Abkhazia denounced Georgia's move as an act of aggression.
At least 50 people were reported killed in four days of fighting between the Georgian troops and Abkhazian police in Sukhumi, a resort on the Black Sea.
Abkhazia's parliament voted in July to restore the 1925 constitution of independent Abkhazia. Ethnic Abkhazians total roughly 90,000 among the area's 500,000 people, but they enjoy the support of other ethnic groups in the Caucasus mountains.
'The restoration of by the Abkhazian parliament on July 27, 1992, of its 1925 constitution is tantamount to a self-annulment of its autonomy,' the State Council said in a memorandum released yesterday.
Mr Kitovani issued an ultimatum on Sunday demanding the resignation of the Abkhazian parliamentary speaker, Vladislav Ardzinba.
The ultimatum said Georgian troops reserved the right to launch combat operations if Ardzinba refused to step down. A group of Georgian Supreme Soviet deputies were reported to have demanded Ardzinba's resignation.
'Whether or not Abkhazia's parliament resigns is the business of the deputies and the Supreme Soviet of the republic,' Georgia's Acting Prime Minister, Tengiz Sigua, said, adding that he had no comment about Mr Kitovani's ultimatum.
Most of the Abkhazian leadership had apparently been evacuated from the city, although the Deputy Prime Minister, Sergei Bagapsh, remained in his office on the 12th floor.
http://www.independent.co.uk/news/world/europe/georgia-seizes-sukhumi-1541134.html
Related
Posted by AP at 00:59