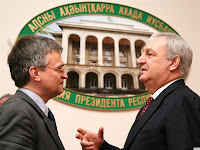 December 14, SUKHUM -- Today the President of Abkhazia Sergey Bagapsh has received the EU Special Representative for South Caucasus Peter Semnebi. A frank exchange of view took place on the situation in the process of negotiations, first of all, in the format of Geneva discussions. The President of Abkhazia said the atmosphere around the Georgian-Abkhaz settlement in the light of reaction of the European political circles and the US Senate to the Georgia’s President Saakashvili’s declarations, forces Abkhazia to essentially modify its position.
This applies to possible cooperation of the Abkhaz party with the European structures not only in the political, but also in the humanitarian sphere. According to the President, the attempt to divide cooperation for a political and humanitarian aspect does not lead to positive results. “We can see politically poorly-thought out and committed actions of European structures supporting Georgia, despite the tragical events which the Georgian party is responsible for”, Sergey Bagapsh said.
The President of Abkhazia reaffirmed to the EU Mission his position in relation to the so-called "peace initiatives of Tbilisi”. The experience of relations with Georgia proves the contrary to the Abkhaz party. That’s why Sukhum cannot trust any Saakashvili's declarations until Abkhazia receives clear acknowledgement of Georgia’s readiness to sign an Agreement on the non-renewal of hostilities with international guarantees. An official letter with the Abkhazia’s position on this matter has been already sent to the UN Secretary General, Sergey Bagapsh said.
The head of state also notified the delegation on the intention to start creating full-fledged border infrastructure on the river Ingur in the near future.
Source: Abkhazia Gov.
Posted by AP at 13:06