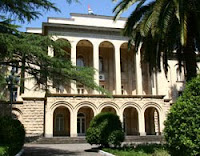 Businessmen, representing the leading construction companies from Turkey, expressed readiness to support their historical Motherland in the sphere of construction. “We have all possibilities both financial and technical for this”, Aluk Tsugba said at the meeting with the President.

Representatives of construction firms presented to the President a booklet with the properties they have built in Turkey.

Welcoming the guests, Sergey Bagapsh said a state cannot develop without economy. “Our country’s independence was recognized two years and a half ago. And now we need serious work of both the citizens of Abkhazia living here, and the Abkhaz, being beyond the bounds of their Motherland”, the President said.

The President emphasized that the Russian Federation renders much aid and support to Abkhazia. “Russia renders free aid of RUB 11 bln. to Abkhazia. On these funds we restore roads, we build kindergartens, we repair schools, hospitals, we put the water and power supply systems in order. In the first place we need to restore this infrastructure to begin construction work”, the President said.

The head of state briefed on the planned large-scale work on rehabilitating the railway and the airport, building a road connecting Abkhazia and Karachay-Cherkessia, supplying Abkhazia with gas. According to Bagapsh, there’s also much to do in agriculture. He suggested that businessmen should decide, what specific areas they would like to work in. “If there is a wish to build a factory, a plant, to be engaged in agriculture –no problem”, Bagapsh said.

Speaking about the Turkish-Abkhaz relations, Sergey Bagapsh said he understands the position of Turkey, which is a NATO power. “And, nevertheless, Turkey is our nearest neighbor, some day mutual relations between our countries will be established anyway”, the President said.

A MP Taali Khvatysh, who accompanied the delegation, said he had returned to his Motherland 10 years before and he was not sorry about it. “I believe that every Abkhaz wherever he is, should think of how to return here and to help restore the country’s economy”, he said.
Source: Abkhazia Gov.
Posted by AP at 10:21