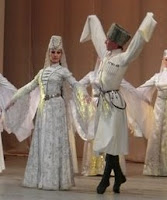 Comment of the MFA of Abkhazia
On the 23rd of September at the 65th Session of the United States General Assembly in New York Michael Saakashvili addressed to People of Abkhazia: “ I want to tell them once again: we will protect your rights, your culture, your history-we will work with you, we will work for you”.
At the same time, the official website of the Georgian government is translated into Abkhazian language, so, from now on the information about government activity will be available for Abkhazians too. Thus, Georgian side is expressing loyalty towards Abkhazia which is actually just a Public Relation act.
We are outraged by the Georgian representatives’ attempts to block the participation of the State Folk Dance Ensemble of the Republic of Abkhazia "Sharatyn” at the “Chonan Huntarion”, International folklore festival-contest in South Korea. Moreover, this action was supported by the American Embassy in South Korea.
As it became known the US Embassy representatives have been trying to break off further Abkhazian concerts in South Korea on Georgian request.
In fact, the real direction of today’s Georgian authorities hasn’t changed at all and is similar to the Stalin’s strategy when Abkhazian people survived through assimilation and mass destruction in the cultural sphere as well. Georgian direction is still pointing at the political, economic and cultural isolation of Abkhazia and its citizens. Such actions of Georgian side and its American partners can be only considered as the cultural genocide of People of Abkhazia and prove once again absolute impossibility of the co-existence of Abkhazians and Georgians in a single country as it is offered by the Western allies of Georgia.
Sukhum 20/10/2010
Source: MFA Abkhazia
Posted by AP at 10:51