Bagapsh: My thanks to Turkey 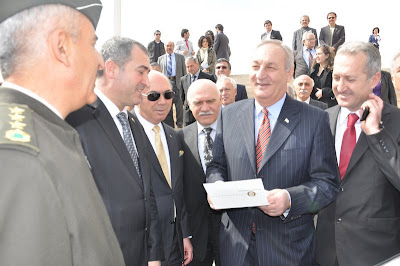 Hasan Kanbolat - Today's Zaman
12 April 2011
Sergei Bagapsh, the leader of Abkhazia, a country that declared its independence from Georgia in 1992, completed his visit to Turkey and return to Sukhumi.
Bagapsh has been in office for six years. Previously he had planned to pay a visit to Turkey on several occasions (Oc. 17-24, 2007 and April 21-25, 2007), but these visits had been canceled at the last moment at the request of Tbilisi. In this regard, Bagapsh’s current visit was considerably important, and if we are to analyze it, we should first note that he does not regard Turkey as a foreign country and treats the political distance between Turkey and Abkhazia as “a matter within the family.” For this reason, Bagapsh particularly refrained from criticizing Turkey’s Georgia policy. He also noted that he pays respect to Turkey’s Abkhazia policy.
Referring to his visit to Turkey, he said: “Our sole purpose with this visit is to thank to Turkey. If we had been officially invited, Turkey would have received many reactions. With its smartly designed policies, Turkey had become a leading country in the region. Turkey is exerting great efforts to maintain peace in the region. I would like to thank to Turkey for its tolerance. Turkey is a serious country and we always respect its actions. We wouldn’t want to cause any harm to Turkey in order to get our desires fulfilled. We appreciate Turkey’s position. First of all, we want Turkey to understand us. Of course, this process will start and continue. We believe that we will make great progress in this respect.”
Bagapsh is determined to establish ties with Turkey through a gradual process. It is clear from his statements that he intends to boost economic relations with Turkey in the first place. Abkhazia is both a secure and stable country. Turkish businessmen may use this country as a base for their trade with the Russian Federation. Tourism, energy, industry and agricultural investments may be made in Abkhazia.
Bagapsh also seeks to reinforce the ties between Turkish citizens of Abkhaz origins and Abkhazia. “The Abkhaz diaspora in Turkey is strong and this visit was made possible through their efforts. I am grateful for the tolerance Turkey affords to us so that we can re-establish the ties among our people. [A total of] 500,000 Abkhazian live in Turkey. We are a small country. We have demographic problems. So, we wish our people in Turkey to return to the homeland. However, this is not easy. Turkey is very advanced in many respects. The Demographic Committee will provide homes and jobs for our sisters and brothers coming from Turkey. Currently, it is vitally important for us to boost our demographic power,” he said.
Touching also on Abkhazia’s relations with Georgia and the Russian Federation, Bagapsh stressed: “Abkhazia has never been part of Georgian territory. We have never attacked Georgia. We are ready for all sorts of negotiations with Georgia, but as two recognized countries. No other sort of negotiations are possible.”
He also commented on the forceful seizure of the Turkish vessels in the Black Sea by Georgia. “Georgia is no different from the Somali pirates. Such an act is wrong. It is not proper,” he said.
Pointing out that Abkhazia is being portrayed as part of or as a region of the Russian Federation, Bagapsh said: “Such a thing is unacceptable. Abkhazia has to maintain its bilateral relations as an independent state.” Abkhazia’s independence is recognized by the Russian Federation, Nicaragua, Venezuela and Nauru. Bagapsh claimed that many more countries will recognize Akbhazia’s independence in the next few months.
Bagapsh politely knocked on Turkey’s door, and it opened, and he became a guest of Turkey, then returned to his home after thanking Turkey. After this, Turkish-Abkhaz relations will improve on a multi-dimensional level without bothering Georgia. These improved relations will result in sea and air transport. Educational, cultural, humanitarian and development aid and increased visits by both countries’ delegations will create new ripples of improving relations. The stability, security and welfare of the eastern Black Sea region depend on the harmony between Turkey, the Russian Federation, Georgia and Abkhazia.
Source: Today's Zaman
Related
Posted by AP at 02:28