Keep it up, Abkhazia! by Karlos Zurutuza 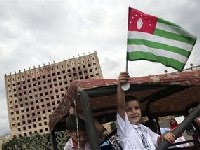 People are always curious. “But why Abkhazia?” they ask. It is indeed a tough question, not one I can answer in any very coherent way. Before I even start, hundreds of images swirl through my mind. Images of Strabo’s army of 70 translators, Jason’s Argonauts in Colchis, but also the Genoese and the Turks, Keraban the Terrible and Konstantin Paustovsky. Did you know that Paustovsky once got drunk with Isaac Babel in the monastery hostel in Novy Athos?
So I secured my clearance letter, mailed to me as a PDF document, and that granted me Maxim Gunjia’s warm welcoming in Sukhum. And then came that picnic day with Aljasur, a Chechen war veteran from Grozni. “We came on foot from Chechnya to help,” he said, pointing to a mountain path that skirted an achingly beautiful lake called Ritsa. That day I saw offerings to both Ajargi and Ananagunda, two of the Abkhaz old divinities, and learned about local hunters speaking a language that, they said, “their prey would not understand.” Would they dare to speak it in Khabug’s presence? Probably not, for Sandro of Chegem’s old mule was nobody’s fool.
And there was also that Abkhaz superb linguist who spoke every local lingo but also lots of very foreign ones…even Basque! Among a million things he told me was the tale of the Estonians who lived at a tiny village called Salme. Unfortunately, the Estonians had left by the time I first visited Abkhazia.
A bottle of brandy shared with an Armenian painter from Gulripsh and a green eyed Greek sailor from Gagra. We toasted for Hayastan, for Dioscurias, and for many other places that I cannot now recall. But I do remember a wonderful dusk light over a sumptuous Mingrelian meal. That was in Gali.
You have given me so much, Apsny-Abkhazia! Let independence be the tool to keep all your treasures safe and, at the same time, open to the rest of the world!
Karlos ZURUTUZA, Freelance correspondent specializing in the Caucasus and the Middle East regions. BASQUE COUNTRY.
Source: Reflections on the Caucasus - Circassian World
Posted by AP at 14:45