Abkhazia has lots of preconditions to be a sovereign state 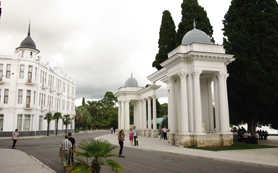 Interview with Fred Weir, a CIS correspondent for The Christian Science Monitor.

Fred, thanks for joining us. Patrick Buchanan in his story says that Senate had no right to criticize Russia on Abkhazia and South Ossetia, do you share this view?

I suppose it is important to know that Pat Buchanan is a very prominent member of the Republican Party, he ran in the presidential primaries twice, in the 1990s, but he is of that part of the Republican Party, that wing of the party, that is often termed isolationists, which means that his criticism is not based on any particular love of Russia or support for the Russian position. His position is that the United States should not get involved, in very large parts of the world where it can only do bad. This is his argument, and he says in the article that the United States is just unnecessarily antagonizing Russia over a matter that the United States has no business involving itself in. So this is a position, but it is a minority position within the Republican Party and it is not going to be widely accepted. But today in the Republican Party the same position is held by Ron Paul, who is part of this wing of the party the same as Buchanan is, and Ron Paul is not only running in the presidential primaries, he is doing very well in using the same arguments that the United States should get out of a lot of these foreign entanglements, there is no business being in Iraq or Afghanistan, building an empire, having troops in Korea or in Germany still. This is what is often termed isolationism, and it is surprising that it is doing well in the Republican presidential primaries so far.

Fred, have you been to Abkhazia, have you seen the developments in the republic?

Yes, I spent a couple of weeks in Abkhazia in 2008 just before the war, just weeks before the war broke out, and first of all I was stunned by the natural beauty of that place, it is really an amazing national creation that will do very well if they can solve their political problems. I am sure that even when I was there, there were enormous numbers of Russian tourists in places like Gagra, and I am sure that this will only get better, that the prospect is excellent, but especially in the southern part of Abkhazia, Sukhum and further all the way down to the border there, most of the infrastructure is still destroyed from the war; in the capital Sukhum even lots of buildings are still bombed out, they have an enormous amount of work to do.

But do you believe that they can develop into a sovereign state?

Sure, I don’t see why not. We know there are lots and lots of places that are members of the United Nations, little tiny dots on the map, which are sovereign states. It is not rocket science apparently to manage a sovereign state. There are some places in Africa or South Pacific would never make it, if they had high-standard statehood. So I am sure Abkhazia has lots of preconditions to be a sovereign state, it is just caught in the political gears or geopolitical gears, which prevented from being recognized by the world, because the world and particularly the West argues that it has to settle its issues with Georgia, and it is under international law, and it is true. Under international law it is part of Northern Georgia, and it is an issue that has to be worked out.

Fred, can I ask you one question about the Russian-American relations? So as you know this Abkhazia and South Ossetia issue is a matter of contention in our relations. So do you think it can jeopardize the reset process, it can poison our relations, or we have agreed to disagree on that subject?

I think that the worst moment of course was at the time of 2008 war, and that was when it all blew up and George W. Bush was still President of the United States, and he had a fairly hostile attitude towards Russia, so I don’t think that this is going to get worse. It remains a frozen problem. These problems remain and they can blow up in the future, there is no doubt about that.

Source: The Voice of Russia