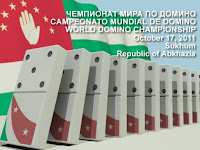 The decision regarding the championship in Abkhazia was made in spring 2010 in Las Vegas, where the previous competition with Abkhazian participants was held. After the end of the championship Arthur Gabunia, the President of the Domino Federation of Abkhazia presented the country as a candidate for the next competition and this offer was unanimously accepted.
Delegates from more than 20 countries including Brazil, US, Canada and others will take part in the championship.
Posted by AP at 01:24