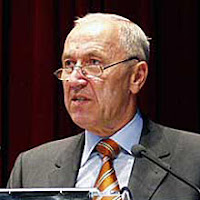 Olesya Vartanian / Ekho Kavkaza, November 19, 2010
TBILISI --- Dieter Boden, Former Head of OSCE and UN missions in Abkhazia and South Ossetia, presented his view of current policy towards the disputed regions in Tbilisi. Boden also spoke of the lost opportunity to resolve the Georgian conflict.
Nine years ago, in December 2001, Dieter Boden, delivered an initiative in his position as UN special envoy that was revolutionary at the time. Now few people remember the proposal’s long title; almost everyone simply calls it "the Boden Plan.”
This document defines a new constitution, in which Abkhazia was defined as a "sovereign entity" within the "federal state" of Georgia.
Last night Boden, speaking at the "European House" in Tbilisi, said for the first time that he already had the consent of Sukhum long before his official presentation of the "plan.” The Kremlin then gave its approval. Sergei Lavrov, Mediator from Moscow at that time, spoke afterwards.
"At that time, strong resistance came not from the Abkhazians, but from the Georgians. It came from the faction of the parliament that represented the interests of the Abkhazian government in exile. They were categorically against the use of the term "sovereign” to describe Abkhazia.
As Boden says, when the Abkhazians learned of the feud in Tbilisi, they decided to "seize the moment” and back out.
This, in turn, influenced the decision of the issue with South Ossetia. Up to that time a similar "Boden Plan" had been on the table of officials in Tskhinval. But when they saw the difficulties the Abkhazians faced, talk about the possible accession to "a federal Georgia” ended for the Ossetians.
Despite the failure of "Boden Plan,” in analysts’ circles it has been said that never before or since has Sukhum and Tbilisi been so close to concluding a lasting peace.
During his speech yesterday, Boden said that in the short term his document is not going to have practical applications."The realities have changed" - he replied to the question whether he has the desire to mediate between the parties.
For the last few years Boden has been teaching in his native Germany. But analysts say that his influence on current processes concerning the Georgian conflict continues. He occasionally meets with leading players in the Caucasus and abroad.
Speaking yesterday before foreign diplomats, Georgian politicians and public figures, Boden criticized several fundamental points in Tbilisi's policy towards Abkhazia and South Ossetia.
In the first place, he said, even if we imagine that the occupation ends tomorrow, Abkhazia and South Ossetia do not want to become integral parts of Georgia so quickly. "It is an illusion" – Boden said, proposing that Georgia and the international community work in complementary fashion to resolve the conflicts between the Georgians and the Abkhazians and Ossetians.
In this process, according to Bodin, it is first necessary to "work on our mistakes." He offered to give a "political assessment" of the fighting that occurred in the 1990s and during the August war.
"I can tell you that we in Germany had such an experience. Our history consists of periods of resumption of peaceful coexistence with our neighbors, including with those who suffered from Nazi Germany. "
But, Boden said, in contrast to private citizens, politicians in Sukhum and Tbilisi are not yet ready to overcome "their own dramatization of events."
Boden welcomed the approaches outlined in Georgia's strategy for the disputed regions.
"But I have only one concern regarding this strategy. In order for confidence-building measures to begin to work, it is necessary that independent action be taken by independent entities. And I do not advocate any government policies when the state begins to monitor what is happening in the private sector. "
Regarding Russia’s influence, Boden said that "it’s not going anywhere." And in resolving the conflicts in Abkhazia and South Ossetia, Tbilisi still has to reckon with Moscow’s opinion. "The leaders have remained silent so far, but eventually this will change" – Boden said.
Source: Ekho Kavkaza (Дитер Боден: жесткое сопротивление шло от грузин)
Posted by AP at 22:13